The One Man Orchestra

My friend Andreas asked me in 2006 if I‘d like to compose the music for Understanding Games. At that time I had little experience in producing soundtracks for video games. Even so, the collaboration for this project worked really well and I ended up doing the sound design for two further projects; Mr. Bounce and The Black Forest.

In 2010 I got contacted by Mattias from Spaces Of Play. He asked me if I‘d like to produce the music and sound effects for a new Lemmings-like iPhone game he was working on. I said yes right away.

Our workflow with Spirits looked something like this: Mattias and Marek told me about the ideas they had in mind and gave me some examples to listen to. They also had some first graphical sketches about the game. 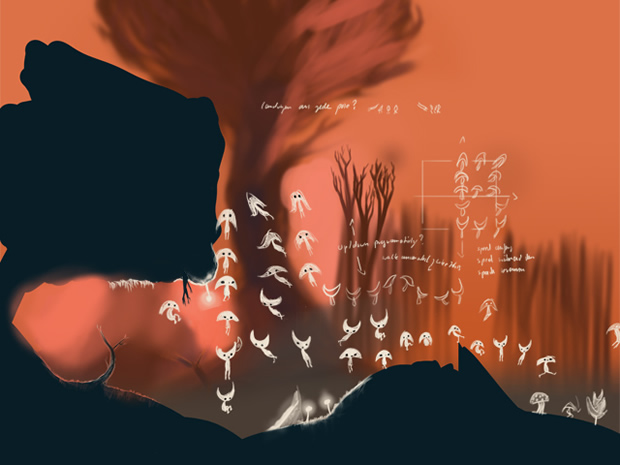 We agreed on doing some kind of contemporary instrumental classical score for the game. That sounds a bit diffuse, doesn‘t it? To be more precise, we wanted to create a poetical, melancholic, and slightly spooky atmosphere using orchestral sounds.

Still not clear enough? I know from my own experience that talking about music and atmosphere in music can often be very difficult and unsatisfying. There is a high risk for misunderstanding in talking about music and agreeing on a musical characteristics during the composition process can become tedious. Because of these problems it‘s very pleasant for a Sound Designer if the client trusts his work and judgment. With Spirits I was lucky to receive this kind of trust.

I started to sketch out melodies and harmony patterns on the piano and refined them in Steinberg Cubase 4. For the instrumentation I used the vast (over 33 GB) Komplete 5 library from Native Instruments which allowed me to fine-tune the characteristics of the instruments in a very intuitive way.

Marek provided me with videos of specific scenes in the game which made my work feel like composing for a silent movie: I‘m the conductor and together with the orchestra I‘m watching the scenes and spontaneously set them to music.

I decided to assign the "drummer" in my virtual orchestra for a major part of the sound effects. Every action in the game should be made audible by the sound of a percussion instrument that best matches the characteristic of the action. For example when building a bridge out of leaves, the player can hear the leaves rustling. This sound is created by a rattle shaking. I used a similar approach to sound design with musical instruments in Krystian Majewski‘s Trauma.

I regularly uploaded my music patterns to Basecamp so the other team members could review them and give feedback. Mattias would put the sounds into the game so we could play-test how well the music and sound effects fit. After several iterations we ended up with three nine-minute tracks each consisting of three varied parts which slowly build up.

For the mixing of the tracks I used the UAD-2 Solo Neve DSP card which features an excellent emulation of the Neve 88RS Channel Strip and Neve 33609/SE Compressor. For the mastering of the sounds I went to the studio of Andreas Schorpp in Karlsruhe where he works with high class analog equipment which allows for a much better result compared to home-recording equipment.

Martin Straka works as a sound designer since 2005 and lives in Karlsruhe, Germany. You can listen to his work at his website or follow him on Twitter. Many of his video game soundtracks are also available on Bandcamp.